Having a dog as a pet is fun but having a bull terrier as your pet is more fun. This dog is playful, friendly, and warm in many ways. It is known to be goofy and charming to its owner, and always hyperactive around people it loves.Due to its lovely, playful nature, many people love this breed. This article is an Informative Guide on the Bull Terrier Dog Breed

Historical Facts on the Bull Terrier

Bull terrier was first seen in England in the 1800s. It was a crossbreed between the bulldog and extinct English Terrier. To improve the sizes, it was then crossbred with the Spanish pointer.

This hybrid dog was commonly used in a popular sport (fighting competition) called bullbaiting. A number of them were placed in a ring with a bull, then bets were placed on which dog will attack the bull first. This was common in England in the 19th century.

In later years, there were crossbreeds of a Dalmatian and English terrier. This produced a tough and contemporary white dog. The variation was later named “white cavaliers” in the late 1800s.

As the years went by, it became a valued pet of many English gentlemen. It was seen in the carriage of these gentries, proudly riding next to them in the park.

In 1900, there was a crossbreed with the Staffordshire terrier which brought about the bright color of the coat. Today, bull terrier is a popular, amiable breed among many. Although it has a ferocious progenitor, the bulldog, it turned out to be a gentle and playful pet. You may want to check out https://www.akc.org/expert-advice/dog-breeds/bull-terrier-history-behind-the-breed/ to read more about the history of this dog. 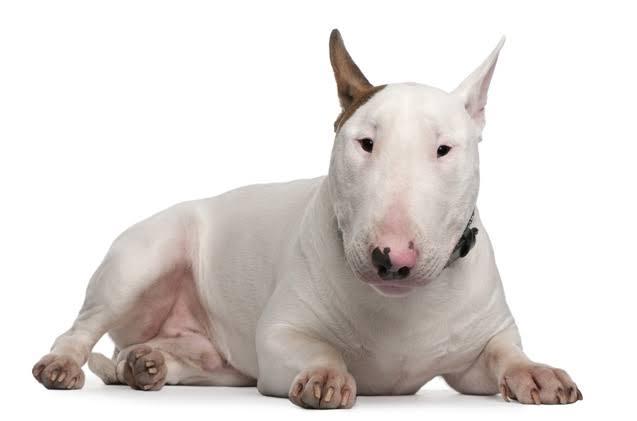 This dog has a muscular, big-boned, and strong appearance. Its head is long and has the shape of an egg with a flat top. The ears are pointed, small, and upright while its neck looks arched and long. The eyes are tiny, triangular, and dark. Its nose has black stripes that slope to the tip.

Furthermore, the breed has a short and thick tail. It has a flat coat that is rough on the surface but shiny and attractive. The coat is either colored or white. Others have multi-colored coats of red stripe and white markings.

The average weight of the male dog is 50 to 70 pounds, while the females weigh up to 40 to 50 pounds. They can be as high as 22 inches from the shoulders. The dog also has its miniature variation which can weigh close to 30 pounds and grow 14 inches in height.

Although the present-day bull terrier is still as strong and muscular as it was before, it is more of a charming playful pet than a fighter. It’s friendly to children and adults, energetic, and loves having fun. It is rare to see an introverted bull terrier because they are always feisty and ready to play.

Bull terriers have been described as brave and courageous. If not balanced, these traits could affect the way they behave. They could become jealous and possessive. Also, if they are not trained from an early stage of life, they can be a threat to fellow pups and animals. Although they are sweet and calm around humans, they can also be destructive and may not like staying indoors.

A bull terrier is intelligent and has an independent streak. Due to this independence, it might be challenging to train it properly. Commending and praising this dog can help it stay focused. Also, offering delicious dog treats during training lessons is effective.

Whether it’s a standard size or mini bull terrier, it must exercise daily. At least, each day your dog should undergo 45 minutes of training. There are various games that you can play with your dog.  Jumping, playing chase, running, or capturing a ball are all fun activities.

It’s not advisable to take bull terriers to dog parks; they generally do not relate well with fellow dogs. Since this breed is muscular and likes moving around freely, they like to stay in a wide living space. Houses with a large backyard are great for them as they love to move around a lot.

Generally, bull terriers are healthy, but this doesn’t mean they cannot have health-related issues. Some of the common problems they may have are:

A bull terrier can live up to 15 years if properly fed and groomed.

How to Take Care of a Bull Terrier

Taking care of this dog requires great supervision and hard work. One important thing every owner should always take note of is to never leave this dog alone at home. It is a chewer and can eat anything in its way. Do not leave harmful toys in your home or else your chew-loving dog can ingest something dangerous.

How it is fed matters a lot. Like humans, dogs eat differently. Some like to eat a lot, others play more than they eat. You can include a lot of protein in its diet for energy. Vitamins and calcium are also important as they help to prevent health issues. Keep an eye on your dog’s weight, it can become overweight if not properly taken care of.

Additionally, the bull needs weekly grooming. You do not need to bathe it, but you can use a wet cloth and soft brush to remove dead hair from its coat. Brush its teeth thrice a week and trim the nails at least once a month. Clean its ears with a cotton bud and a cleanser that is recommended by a veterinarian. You may want to click here to read more about how to care for bull terriers.

READ  Tips on Protecting Your Home from Pet Damage

The bull terrier dog breeds are hyperactive and make great friends and playmates for adults and older children. However, they can behave aggressively around children they do not know. Therefore, it is advisable to train them at an early age. You can introduce socialization with other humans slowly so they can learn how to play with people they do not know.

What Dog Breeds Should you Consider When Looking to Buy

Tips on Protecting Your Home from Pet Damage

Pest Control in Restaurants and the Foodservice Industry