Just when we thought Top Boy couldn’t get any better, the British television crime drama series scouts in legendary music artists, Drake. Written and created by Ronan Bennett and directed by Yann Demange and Jonathan van Tulleken, Top Boy is a story centered around two London drug dealers as they ply their lucrative trade at a public housing estate in North London. On a battle to get to the top, watch as it may lead them to dominance or to death. Follow our path today to know more.

Welcome to the best

The rap giant who is an executive producer on the show as well as the one responsible for the rights for the gritty crime drama, Drake joins the cast of Season 3 of British television crime drama series, Top Boy. Ahead of its arrival on Netflix, the rapper arrived on the red carpet at the Hackney Picturehouse last night alongside Ashley Walters, one of the show’s original stars. The pair were also joined by Little Simz and Michael Ward, who are new additions for season three.

Describing how he first fell in love with the show on YouTube, Drake previously explained that it was the human element that drew him in. Season Three sees the dramatic return of Dushane and Sully, played respectively by Ashley Walters and Kane Robinson.

Will Keanu Reeves Ever Return As Constantine In DCEU

Convicted Killer Of Woman, Set For Early Release, Outraging Her Family: Every detail you...

vikas shrivastava - September 25, 2019 2:00 am EDT 0
A California man convicted of manslaughter in the violent death of a 36-year-old woman a decade ago is set to be released from prison... 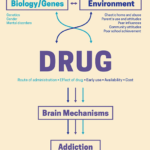 Gene expression can be modified by Chronic cocaine use

Our two favorite characters from the award-winning series, Mad Men, met up for the sweetest mother-daughter reunion and honestly, we...