Hurricane Dorian Updates: Storm hits the Bahamas, evacuations ordered in the US.

The Bahamas was hit with category 4 storms. Hurricane Dorian created an extreme Destruction on the Bahamas. Five people were reportedly dead on Abaco Island. People are ordered to evacuating those areas. The storm surges rose 14 to 18 feet above normal tide levels.

The Hurricane Dorian hit Bahamas and Abaco and now is expectedly moving towards Florida shores. Hubert Munnis, Prime Minister of Bahamas said that police confirmed 5 deaths. He said that the Bahamas is in the midst of historical tragedy. He added that their focus in on the search, rescue, and recovery. The storm has created immense destruction in the Bahamas.

Many homes, business buildings, and other infrastructure have been completely or partially destroyed. Downtown Grand Bahamas is less than three feet of water, which includes hospital and PM’s office.

The weather forecast head said that the hurricane has started moving north. They have been waiting for this. This will give relief and time for rescuing people in Grand Bahamas. The people of Grand Bahamas are running out of drinking water.

The water systems have been destroyed. The food warehouses were flooded too. The aid workers somehow have managed food for about two weeks. According to reports about 15% of the total population consists of children. Less than 10% are elderly.

Many people posted pictures of their disastrous condition and videos showing the rise in the water around there houses. This is a disastrous time for people of the Bahamas. They need to be rescued and recovered.

Linda Ronstadt has found her another voice.

vikas shrivastava - September 5, 2019 6:00 pm EDT
0
Linda Ronstadt had to give up performing because of her Parkinson’s disease, which made singing an extremely difficult task for her. A few months...

Miller Willson - January 10, 2020 3:06 am EST
0
Project management professionals have to play a variety of skills. A successful project manager is a strong leader who meticulously leads and accomplishes the... 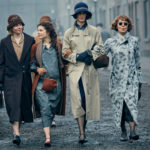 Prince Garg - October 10, 2019 1:00 pm EDT
0
In a nutshell: Aberama is set to be traveling Glasgow to exact vengeance; Mosley holds Tommy by blackmailing him, who manages to turn the...

Rishi Garg - January 7, 2020 9:00 pm EST
0
Celebrities are really just like us. Just like the rest of the net - Jennifer Lopez is a huge fan of Supreme Court Justice...

Jeannie Mai Opens Up About Her Relationship with Jeezy for the First Time: Here’s...

Prince Garg - September 18, 2019 8:00 pm EDT
0
There is a time for everything, and that time has arrived for Jeannie Mai, as she has finally opened up about her relationship with Jezzy. Jeannie...

Cooked Veggies instead of Raw Are Better For Your Gut Health: Finds Study

Does Inspiration sells?? Then, India’s leading Model Karan Oberoi does too!! Let’s find...

kratika parwani - September 22, 2019 3:18 pm EDT
0
"Our greatest weakness lies in giving up. The most certain way to succeed is always to try just one more time." -Thomas Edison The biggest...

Harry Styles Might Make a Cameo in ‘Star Wars: Rise of Skywalker’ and OMG

Bradley Cooper and Irina Shayk reunited at the British Vogue and Tiffany & Co....

anshi gupta - February 5, 2020 3:00 am EST
0
Exes Irina Shayk and ex Bradley Cooper rejoined and postured for a photograph together on Sunday night, as they went to a similar post-BAFTA...
© Copyright 2019 - Daily Bayonet