Taylor Swift is swiftly moving up the controversy ladder we must say. Recently in an interview with Vogue, Taylor announced that she will be the cover star of the magazine’s September edition. Additionally, Swift talked a lot about her recent album Lover.

Taylor insists that her fans listen to the title track of the album since it has all to do with that one thing she absolutely loves-bridges.

In Swift’s words “ This has one of my favorite bridges. I love the bridge, and I was really able to go to Bridge City.”

Is it what we think she is talking about? Is it for real? Were the fans correct in guessing that Swift is perhaps hinting towards her probable engagement?

Traditionally, the bride should have something, old, blue and borrowed and one line from the title track of the new album says “My heart’s been borrowed and yours has been blue. All’s well that ends well to end up with you.” Curious?

Well. it won’t be surprising. After all, Joe Alwyn and Taylor Swift have been dating for almost 3 years now. Rather a no-proposal would have been utterly surprising in this case.

Seems like the cat got her tongue! Oh c’mon Taylor, why the hide and seek? Tell us if we have guessed it correctly!

If not from Taylor, we have heard from our reliable sources that in the past Taylor had said that Alwyn is “the one for her” and that she “wants to get engaged to him.” But so far the duo has been extremely private about their relationship and has very rarely spoken about each other in front of the press.

So are the lyrics, Taylor’s musical way of confirming the engagement? Or perhaps its nothing at all!

vikas shrivastava - October 5, 2019 9:00 pm EDT
0
PlayerUnknown’s Battlegrounds(PUBG) has expanded to include cross-platform multiplayer across PlayStation 4 (PS4) and Xbox One (XBO) ahead of Call of Duty: Modern Warfare launching...

Scientists Are About to ‘Unravel’ Vesuvius’s Ancient Papyrus Scrolls

mohit sharma - October 9, 2019 1:30 pm EDT
0
It is hard to comprehend how a tiny papyrus scroll could withstand a volcanic eruption. Even though is comprehending how such an artifact can...

Prince Garg - January 11, 2020 5:00 pm EST
0
The 25-year-old vocalist uncovered on Instagram on Wednesday that he has been experiencing the irresistible infection - which is spread by ticks - and... 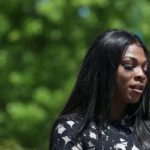 Transgender woman shot in hate crime – Here's every detail you should know about...

Pathak - September 25, 2019 12:30 pm EDT
0
Police in Dallas is investigating a shooting attack on a transgender woman as a possible hate crime. The Friday night incident comes amid community...

Robots a Threat to British workers – why?