Fans are going frenzy over the internet in order to get their hands on old music by Lil Wayne. On Friday, Lil Wayne started leaking again. He somehow got into the leaks again as an old and original version of the highly appreciated album, ‘Tha Carter V’ by Lil Wayne was found on the internet.

Although the album was dropped in September, last year, yet the songs were recorded long ago. The album was a result of too much hard work and preparations over the years.

To calculate a probable date, the songs must have been recorded somewhere around five whole years ago. Fans are ecstatic after they got their hands on the amazing original version of the song. Some songs from the album were re-recorded and changed over the years.

There were some other collaborations that were anticipated but did not turn out as a reality on the release of the album. Some songs were added and some were removed. The album went to remodeling and shaping before it reached us.

So, it is understandable that when fans caught on the original version, they could not help but fall in love with the original art.
Lawyers of the star have been doing rounds to remove the piece of the leak from the internet but a lot of the audience has probably heard it already.

Chances are that you might still find the piece of music doing rounds over some platform, still available for the fans to go through it again and again. Some fans might have already downloaded and recorded the original version for themselves.

Others are still scrambling over the internet t get their hands on the piece of music by Lil Wayne.

Rumors have that the originally planned album consisted of twenty songs and most of them did not get released.

anshi gupta - January 22, 2020 6:20 pm EST 0
Women make the primary transfer on Bumble, so you don't have to worry about unsolicited information from weird dudes. (Obviously,...

“Our son will need therapy”: Orlando Bloom on co-parenting with Miranda Kerr: 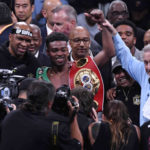 Are Chris Martin And Dakota Johnson Together Again? Here’s What You Should Know

Prince Garg - August 23, 2019 7:46 pm EDT 0
Hollywood film actress Dakota Johnson and Singer Chris Martin have been in the news for a while now. Earlier because of their breakup after...

Throughout the year 2019, 50 cent a.k.a. Fifty has been going around tormenting people about the money they owed to...