Camila Cabello and Shawn Mendes have been the talk of the town for quite a while now. Their affection for each other doesn’t seem to be hidden anymore. Both of them are all around the place and rumors about them are catching more and more fire as the days pass by. And what’s new is that they are not trying to get rid of it anymore?

They have been seen together tons of times going out with each other, locking lips publicly and not being able to keep their hands to themselves. Shawn and Camila have been probably seeing each other for a while now and fans just love it.

Though there are some people who think all of this is fake and a cooked up to show, does it really matter? Because the duo looks really cute and sweet together.

Well, this time it is a little different. They were not caught in the act if PDA but this time they messed with the paparazzi.

Recently, the rumored and most loved couple played a prank on the paparazzi. Shawn Mendes and Camila Cabello went out shopping early for the upcoming occasion of Halloween.

They must have found costumes and apparatuses suitable for their tastes and likes. But what really came as unexpected was how they walked out of the shop. The duo wore a Halloween mask to disguise themselves from paparazzi and to walk away without anyone noticing them.

Shawn walked out in an ugly baby mask with crying expressions while Camila Cabello walked behind him in a unicorn mask, well that is very much like her.

All these cool stuff make it look like they are a real couple for sure and yeah not missing the fun part in them. Earlier, Shawn was asked by a paparazzi about what he thinks when people say that Shawnmila is just a publicity stunt. Shawn just ended it at once saying that they surely aren’t a publicity stunt.

Should we count that as a dating confirmation? 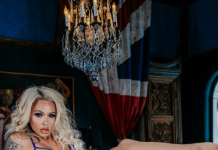