This year’s edition of the World Darts Championship is upon us, and the excitement that comes with the festive tournament is starting to build for fans who are planning to watch on from the comfort of their own homes and those lucky enough to get their hands on tickets, which have been like gold dust this year, due to COVID-19 restrictions.

As usual, three-time world champion Michael van Gerwen is being named by the bookies as the market leader in the PDC World Championship odds from Betfair, but of course he will have the likes defending champion Peter Wright and Gerwyn Price hot on his heels.

However, whilst the Dutchman is more familiar with the iconic Alexandre Palace, and has proven plenty of times in the past that he can cope with the pressure put on his shoulders by his adoring fans when he takes to the oche, some fans and pundits alike are concerned by his form thus far this year.

It’s fair to say that ‘Mighty Mike’ hasn’t been up to his usual high standards this year, and until his recent win at the Players Championship Finals, he had won a mere four titles, including just one triumph in a televised event – the UK Open back in March, which was also the last time fans were allowed to attend.

Back in January, the World No. 1 was denied back-to-back World Championship victories by Peter ‘Snakebite’ Wright, as the Scotsman eased to a 7-3 victory. He was then shown the exit door in the Last 16 of the Masters, losing 10-6 to Jonny Clayton, before two further early knockouts in the World Matchplay, where he suffered an 11-4 defeat to Simon Whitlock, and the Belgian Darts Championship, where he was narrowly edged out be Michael Smith (6-5).

And 14-time World Champion Phil ‘The Power’ Taylor told The Darts Show Podcast that he believes van Gerwen is feeling the pressure.

“He’s changed his darts, then he’s gone back to his old ones again but he’s [playing] in flashes. He seems to play brilliantly one game but then loses the next,” the 60-year-old told the popular Podcast.

“It’s just pressure. I know what he’s under and I know what I would do to cure it but I’m not telling him. This is a real test for him.

“There are other players coming through, he’s getting a little bit older and the travelling will take its toll on him because it does take it out on your body.

“You’ve got to be 100 per cent, especially at the World Championship.”

Whilst there’s no doubt that the victory in the Players Championship couldn’t have come at a better time for van Gerwen, especially in the manner in which he was made to grind out the extremely tight 11-10 win over Mervyn King, his opposition in the World Championship could be feeling extra confident after the topsy-turvy year he has had.

When you are at the top of your game, as in any sport, others will come gunning for you, and when drawn against van Gerwen, it is like a final within itself for the ‘lesser’ players, who are constantly looking to get one over on the current best in the world, but given his form, they might fancy their chances that little bit more this year, and that makes the Dutchman more vulnerable in the upcoming competition.

READ  The Case for Litecoin: A Better Version of Bitcoin

Are Online Casinos Growing or Decreasing in Poland?

Here’s What You Should Know Before Playing Slots Online 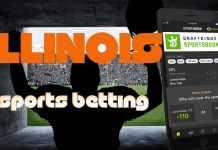 Sports Betting is finally live in Illinois. What does this mean for in-state bettors?