Before moving into the main part of this article, we would like to explain to you what Fire TV Stick actually is. Amazon first launched Fire TV Stick in 2014 which is a series of digital media players that allow you to stream video content directly on your television via a proper internet connection.

Presently two models of Fire TV Stick are available in the market which can access more than 15,000 apps and games, including some popular Entertainment sources like Netflix, Amazon Prime, Hulu, HBO Now, YouTube, ESPN, and Spotify, etc.

Main features of Fire TV Stick are as follows

It is very easy to use Fire TV Stick on a particular device as it comes pre-registered. As a result of this feature, you don’t need to go through the hassle of registering the device first and then using it.

As mentioned earlier, you can easily stream HotStar, Netflix, and Prime Video contents on any device with the help of Fire TV Stick.

Fire TV Stick comes with parental controls settings, which is one of the main features of this device, and hence, you can set a PIN in order to restrict the children from accessing mature contents.

Now we will move into the next segment of this article where we will highlight some of the alternatives of Fire TV Stick.

Therefore, in this segment of this article, we will discuss about top five alternatives of Fire TV Stick so that users can overcome their confusion after reading this article thoroughly.

Google released Chromecast in 2013 which was a simple device with general features but as the 4K contents got more and more popular Google remodeled Chromecast into Chromecast Ultra with more features and also introduced the feature with which this new model was able to stream 4K contents.

Moreover, Google also introduced different features with which the new version of Chromecast started to support High Dynamic Range to unleash the rich contrast and expanded colour gamut of today’s most eye-popping videos.

Currently T95Z Plus is one of the most popular Android TV Box present in the market. This product has a sleek design and comes with a honeycomb pattern and illuminating lights that make this product more attractive among the customers.

In the front surface of this box, you will find an LCD screen which shows the time and also displays the way this device is connected to the TV. The remote of this device has a special button with the help of which you can use your remote as a mouse.

Moreover, the remote also includes a Kodi shortcut button through which you can easily launch Kodi without clicking an icon on the screen.

Xiaomi Mi Box S has a simple design and comes with a straightforward working mechanism but is capable of performing various tasks and is loaded with several amazing features. The entire device is made up of plastic with an understated, matte black design.

It comes with a single LED on the front, which indicates whether the device is on or off. This device can be easily carried from one place to another because of its small size.

Just like a few of the other alternatives, Mi Box S also comes with a top-quality remote which is loaded with a lot of amazing features. Check detailed guide on FireStick Vs Android Box here.

In order to overcome the problems in Roku 3 and for introducing new features developers introduced Roku 4 with more number of features, which is actually an excellent 4K Ultra HD media streamer and can be easily considered as the best all-around streaming media player on the market.

The top panel is matte black, with a glossy 4 in the middle of the box and a small glossy outline of the included remote to the left. The back of the box contains a power connector, an HDMI port, an optical audio output, and an Ethernet port.

Moreover, the buttons of the Roku 4 remote are dominated by a prominent purple direction pad flanked by Home and Back buttons above and playback controls below. Within the remote, you will also find dedicated buttons for using Amazon, Netflix, Rdio, and Sling.

This 4K UHD media streamer from Apple comes with a plastic design, glossy sides, and a matte top. There are slight changes from the earlier model if you compare the two devices on the basis of design and structure.

The new model is slightly raised to expose air vents, which helps to keep the processor cool. It also doesn’t have a diagnostic USB-C port on the back as the earlier model, and instead, it features an HDMI port, an upgraded gigabit Ethernet jack, and a power connection port.

Some other key features of Apple TV 4K include an accelerometer and three-axis gyroscope for playing games, Bluetooth 4.0 and infrared for connectivity, a touch-sensitive pad for navigating tvOS, a Lightning connector for charging, and a Siri remote which has a separate button for speaking to Siri.

As promised at the beginning of this article we have highlighted top five alternatives of Fire TV Stick along with their specifications so you must go through this article thoroughly and select the best option according to your preferences. 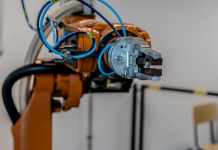