Lady Gaga has been on the top of her career for quite a while now. After her performance in A Star Is Born, her acting career has gotten a kick-start.

Well, it is not only her success stories that make headlines. Gaga has been in headlines quite a number of times due to her love life.

Her break up with Christian Carino months ago was very clearly mentioned in the headlines. Since then, Gaga has been getting entangled in a number of dating rumors. She was linked with her costar Bradley Cooper and looks like fans were really desperate for the duo to be together.

Amidst all these speculations, Lady Gaga was spotted on a brunch date in Studio City’s Granville Restaurant. The guy was none other than the monitor engineer and audio mixer, Dan Horton. Gaga and Dan seemed quite close to each other, having fun during their date. The two seemed to not care about onlookers and continued with their PDA.

People claim that they saw both of them get really close to each other and even kiss each other. Although neither Dan now Gaga has come out open about their relationship and speculations about intimacy, it looks a real relationship for the moment. The duo seems to be invested in each other.

As far as Bradley Cooper is concerned, we do not know for sure if they were ever a thing or not. They had steaming chemistry on screen and maybe that is the reason why viewers started shipping them together. The rumors were ignited when both of them ended their respective relationships. However, Gaga stated that there is nothing cooking between them and the chemistry between them was just an act that they put upon.

READ  National Eat Outside Day : 'Eating Outside is always Fun'

Looks like it was just a rumor and Lady Gaga is finding her love in Dan Horton. Dan finalized his divorce in early 2018 and Lady Gaga also ended her relationship with Carino.

Microsoft to Buy TikTok in US After Talks With Trump

The Passage Season 2 : Why Fox cancelled the show without giving a perfect climax? 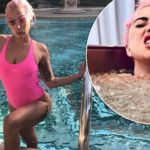 kratika parwani - October 23, 2019 11:00 am EDT 0
Watch out Michael Phelps, Lady Gaga is coming for you! On Thursday, the 33-year-old singer shared a poolside snap of herself getting ready for...

Face App Ropes In The FBI??

The Two Towers And Return Of The King Arrives In Netflix This September, Here’s Every Detail Of It

The weekend is around the corner and Netflix has already flashed the show you’re going to spend all weekend and...