Microsoft and Warner Bros have teamed up to store the 1978 movie Superman on a piece of quartz glass the size of a drinks coaster.

The achievement is part of a Microsoft Azure initiative called Project Silica, aimed at developing long-lasting storage technologies for the cloud that reduce the provider’s long-term storage costs and environmental footprint.

Compared to hard disks which wear out after three to five years and magnetic tape which lasts up to seven years, quartz glass storage could potentially last for centuries, as unlike other storage technologies you only need to write the data onto it once and the material is more robust.

As the glass doesn’t need to be stored at a constant temperature or in a moisture-free environment, the material also doesn’t require the energy-intensive cooling that protects the vast data stockpiles stored in today’s data centers.

Ant Rowstron who is the partner deputy lab director of Microsoft Research Cambridge in the UK, which collaborated with the University of Southampton to develop Project Silica said, we are not trying to build things that you use in your house or play movies from. We are building storage that will operate on the cloud scale.

He added: One big thing we wanted to eliminate this expensive cycle of moving and rewriting the data to the next generation. We want to build something that you can put on the shelf for 50 or 100 or 1,000 years and forget about it until you need it.

Project Silica was launched in collaboration with the University of Southampton’s Optoelectronics Research Centre in 2009.

A team of interdisciplinary physicists, optics experts, electrical engineers and researchers with storage backgrounds have since been investigating ways of encoding cold data onto glass using lasers.

While the team initially worked with femtosecond lasers, its latest demonstration uses infrared lasers to encode data in “voxels”, the three-dimensional equivalent of pixels.

Whereas other optical storage media write data on the surface of materials, the team’s method stores data within the glass itself.

To retrieve the data the team has coded machine learning algorithms that decode patterns created when polarised light shines through the glass.

Apple’s iPhone 11 appearing to be the most popular model pre-ordered in China as...

vikas shrivastava - September 17, 2019 9:30 pm EDT
0
Apple's cheaper iPhone 11 appears to be the most popular model pre-ordered by Chinese consumers after the US tech giant lowered the premium it...

Beyoncé Loses to ‘Carpool Karaoke’ in Head-Scratching Emmys Snub: Know more about it

vikas shrivastava - September 17, 2019 2:30 pm EDT
0
It seems that several members of the tv Academy don't seem to be a part of the Beyhive. On an evening once several expected... 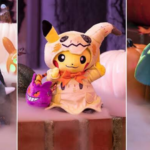 vikas shrivastava - September 27, 2019 7:00 pm EDT
0
BTS has been quite the trend at the present which each of its members gaining individual limelight and appreciation by fans all over the...

Pathak - December 18, 2019 11:00 am EST
0
Scarlett Johansson took to the Studio 8H organize throughout the end of the week to have Saturday Night Live for the 6th time, and...

Pathak - September 20, 2019 11:00 pm EDT
0
Avengers Endgame was released sometime in April this year, and clearly, it was an instant hit, hands-down. But what is surprising is that even...

Pathak - November 15, 2019 12:00 pm EST
0
It was 2012 when India saw American singer-songwriter performing for the first time. She sang hit tracks like Firework and California Gurls from her album Teenage Dream at the opening...
© Copyright 2019 - Daily Bayonet